DUE TO BREXIT CUSTOMS CLEARANCE CONFUSION, DELIVERY LEAD TIMES HAVE BEEN EXTENDED TO 2-3 WEEKS. FURTHER & REGRETFULLY, WE HAVE TO ADJUST OUR PRICES ACCORDINGLY FROM 1 FEBRUARY. Six weeks ago, Yogi, my terrierist, snapped her cruciate ligament.  It’s not life threatening, but it was definitely life changing.  She used to come everywhere with me – to work, running, hiking and, well, basically anywhere I went my little white shadow went too. Following the diagnosis, the vet told me that there could be no walks, no work, no steps or stairs, no jumping on furniture and definitely no running for six months (for Yogi, not me).
After a month I noticed that although Yogi’s leg was already starting to get better, she was not the same old ‘mad dog’; she had lost her spark a bit and was, dare I say it, looking a bit depressed.  She was definitely missing being out and about and spending time on the mountains.
I dug out a child’s ruck-sack, which I had converted for my old dog when she had problems with her lungs and couldn’t walk far.  That was OK, but we still couldn’t run and it seemed to make her leg worse sometimes. That wouldn’t do. As I was driving home one evening I saw a woman pushing a small child in a pretty cool pushchair – it looked quite sporty, so I came home and Googled ‘sporty pushchairs for dogs’, not really expecting anything to come up. But lo and behold, Pets Own Us, based in Covent Garden in London, offer a whole range of Doggy Strollers, and there was a Sporty version which was described as ideal for the beach, trails and for running. Hooray!
To cut the rest of the story short, Yogi and I had a fabulous time last weekend running over the mountains. Well, me running, and her enjoying the views and the fresh air from her ‘pup mobile’. She absolutely loves it and thankfully has been back to her normal happy self for the past week, as the great photos
from www.mixmedia.net show.
Apparently there is quite a market for the Strollers, with owners of aged and poorly (or just spoiled) dogs wanting to keep their best friends happy and involved. I had no idea – and wasn’t even sure that Yogi would adapt to being pushed around the hills in a glorified go-cart but yes, she is and we are both much happier (and me, fitter) as a result. I'm well impressed by the fabulous quality of the product and it’s maneuverability.  It took Yogi a day or two – and some treats – to get used to it and we have already been running over all sorts of mountainous terrain and are planning to go to the beach soon. It is a delight to use ‘off road’ as well as on the country lanes, and easy to push whilst running.  It also has a big handy pocket on the back which is useful for all those necessary bits and pieces … and dog treats!  The Sporty Pet Stroller has given us back our ‘together time’, which is priceless. Here is video of us out and about in our favourite places - the mountains and on the beach putting the stroller to the test.

Let customers speak for us

Following my online query, I received an email with 3 different strollers for comparison and chose this one. We are delighted with this stroller.
So well made and perfect for our French bulldog puppy. We are fostering her and need this so we can take her out with our other dogs.
She is paralysed from the lower back and back legs and uses a little 'chariot' in the house. She needs to be able to come out with us in comfort and safety,
which she certainly can in this.
We ordered the rain cover too, which is an excellent fit.
Hoping for many long walks with our pup riding along in her all terrain stroller. Love the sturdy construction of this and it looks good too.
Apparently Innopet products are Made in the Netherlands with great pride. We thoroughly recommend this product.
My sister is so impressed she will be ordering one for her pups tomorrow. Many thanks

My beagle has had a tough 2020. 3 cruciate ligament surgeries. A failed graft after another. We felt terrible leaving her incthe house to go on walks that she'd usually love, but now can't do. We bought the air comfort buggie and what a difference it has made in just a week. The delivery was exceptionally quick and instalation really easy. The product is comfy and easy to push and she is secure and able to join us on different terains. She now gets to join us on long walks and doesn't have to be left home alone. My only regret is not buying sooner. Can't recommend more. 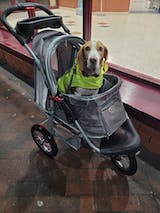 Just wondered if you did a storage bag when folded

I recently purchased a pet stroller, it came almost ready assembled and superb quality ! The company ( pets own us) was very professional and emailed me with updates until my stroller arrived. I cannot praise them enough, I am a very happy customer and I will definitely be buying more from them again. Thanks 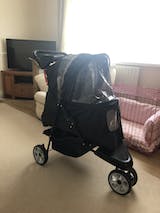 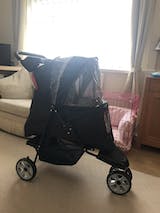 After struggling with my rescue tripod Bull Terrier having to drive most places to do short walks the stroller has been a god send. Im now able to leave the car at home and get into the wonderful countryside for her walks. I let her have short walks then a rest in the stroller. Bella has taken really well to the stroller and acutely lets me no when she wants to be pushed. It so easy to push on all terrains and very easy up and down kerbs. Taking it down to put in the car is so easy the wheels click of and the stroller then folds down with ease. Best thing I have ever bought. Thank you to who ever designed the stroller they certainly had Bella's needs in mind. Great design highly recommend to my doggie friends. 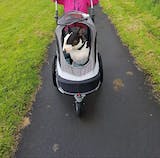 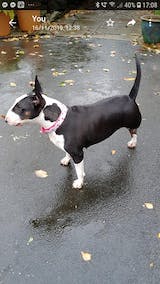 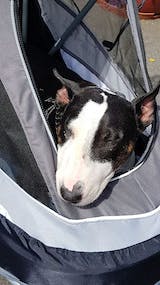